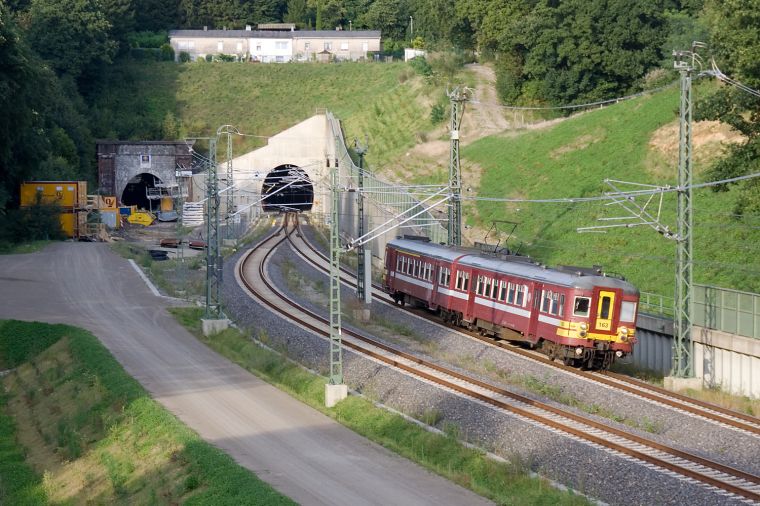 The first railroad tunnel ever built in Germany was the Oberauer Tunnel on the line from Dresden to Leipzig; it opened in 1839, but was cut open in 1934. The second railroad tunnel, the KÃ¶nigsdorfer Tunnel along the line Aachen-Cologne (just east of Horrem), opened in 1841, was cut open in 1954 (both without ever fully closing the line for any lengthy period of time). This means the title of the oldest remaining german railroad tunnel goes to the Buschtunnel (opened in 1843) on the line Aachen-LiÃ¨ge, a few hundred meters from the belgian border. On this picture, it’s the one currently without tracks on the left.

The reason for cutting open the other two were very similar: The tunnels were built before people really knew how to do that well, so they were high-maintenance, in danger of crashing down, and smaller than you would have really liked for a two-track (electrified) mainline. The same problems plagued Aachen’s Buschtunnel, but as the mountain above it is comparatively large, cutting it open was not much of an option. However, with a top speed of finally only 40 kph (25 mph), it was a serious hindrance on the Paris-Brussels-Cologne-Amsterdam (PBKA) network.

You can see the solution here. A new tunnel, known as the “New Buschtunnel” was built, single-track only, with lots of space to get in and out in case of an emergency, huge areas for the firefighters to go to and so on. It was opened 2007. Now, we are in Phase II of the plan. The old Buschtunnel is receiving a new interior concrete shell. This will reduce its interior space, which will be compensated by making it single-track only. When this project is done, the link Aachen-Border will allow speeds of 160 kph (100 mph), reducing travel times by five to ten minutes, and allowing for much more traffic on the line.

Coming out of the new tunnel is a belgian Automotrice Classique, operating the RE 39 service (which will be called IR q in a few moments, when it is on belgian ground) to normally LiÃ¨ge, but that day not the entire way due to construction works. While the electrification looks like german standard, the whole line actually uses belgian 3 kV DC. Happy that I saw a train on this line, I turned to leaveâ¦ and completely missed the west-bound Thalys that came through five minutes later, only catching it’s tail lights.