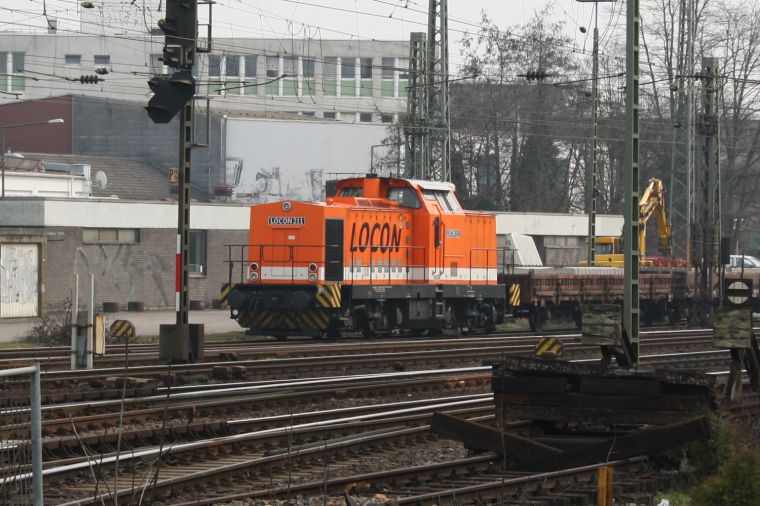 There are a number of standard paths for upstart railway companies in Germany. One that is very common is to start by purchasing old (but often refurbished) locomotives and using them for MOW work, then starting to operate own trains, then leasing one high-powered electric locomotive, then one or two more until… Well, actually none of the ones that follow this path have grown significantly beyond that yet, so they might start building Launch Arcologies for all I know.

LOCON hails from the german state of Brandenburg and is currently in the “first high-powered electric locomotive” stage, but still very much active in the construction train area. The company actually focuses on Logistics and Consulting (hence the name) for railroad construction sites, so the rail freight business isn’t it’s core operation yet.

A fundamental part of all of these companies are refurbished locomotives from East Germany. The classic example is the DR V100, which was refurbished by Alstom and ADtranz (now Bombardier) independently and sold to private companies as class 203. You’d have to work really hard to find a railroad in the MOW business in Germany that does not have at least one of these units in it’s fleet. LOCON 211 belongs to the ADtranz ones (the number of the original unit before the refurbishment is not known), and was seen here standing in Aachen West.

I’m not sure what they were doing there, it almost looked as if they were planning to install a switch where none was before for no apparent reason. The tracks in the station are all about to be rearranged anyway, though, since the RWTH Aachen University plans to take over nearly half the station area to build a new campus, so maybe it was part of that.