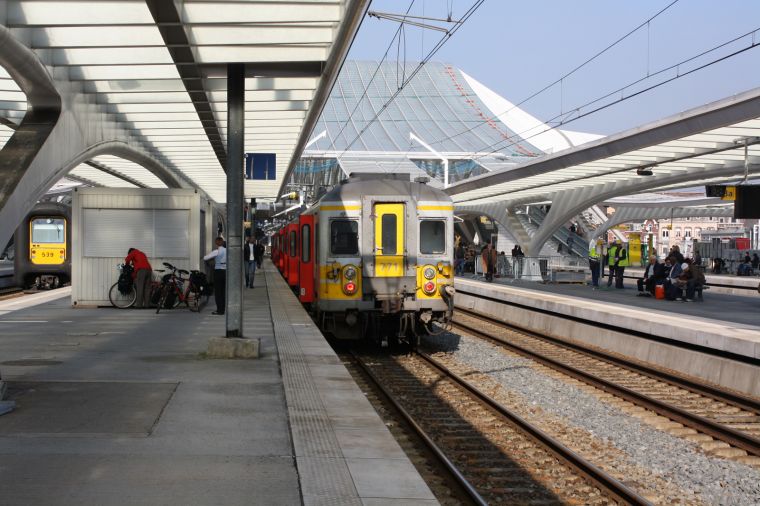 So I spent some time in LiÃ¨ge and found out that my school french is still enough to buy something at McDonalds. Sure, it wasn’t my most elegant conversation ever, but in the end I had something to eat. Had I chosen latin as my second foreign language (it was the only other choice at my school), I’d have stayed hungry, and I think this teaches us all something about foreign languages to learn and not to learn. Or I could have asked the guy whether he spoke english, but where would be the fun in that?

Since I had a ticket that was valid for one day in the entire Euregio, I decided spontaneously to go back via Maastricht and Heerlen, both Netherlands. This was a detour, but the option to take pictures of dutch trains and ride them was too good to pass up. So I entered the regional train (in Belgium called an “L”-train, in the Netherlands a “Stoptrein”) to Maastricht - and did not manage to get a good picture of it.

Back at home, however, I realized that I had already taken a shot of the very same unit, #771, a few hours earlier in LiÃ¨ge, before I headed into the city center. Cool, eh?

771 again appears to be a special kind of the Automotrice Classique, since it was (apparently, maybe it just pretended) able to drive with both belgian 3 kV and dutch 1,5 kV DC. Optically, it’s the white kind, but with a different interior than another white one I took from LiÃ¨ge-Palais back to LiÃ¨ge-Guillemins (a ride of a total of seven minutes, and I really don’t have a picture of that one). By the way, I absolutely did not notice the border crossing here.

By the way, the train I took from Aachen is not equipped for service in Germany at all, it’s a plain belgian version. It can go to Aachen central station since this is the official border station, but not to any other station in Germany. I’ve got no idea why SNCB insists on using the most inconvenient units they even have for that service, but they won’t remain long anyway. The line Aachen central station to Belgium is being equipped with ETCS soonish, and then new EMUs will appear on this service.