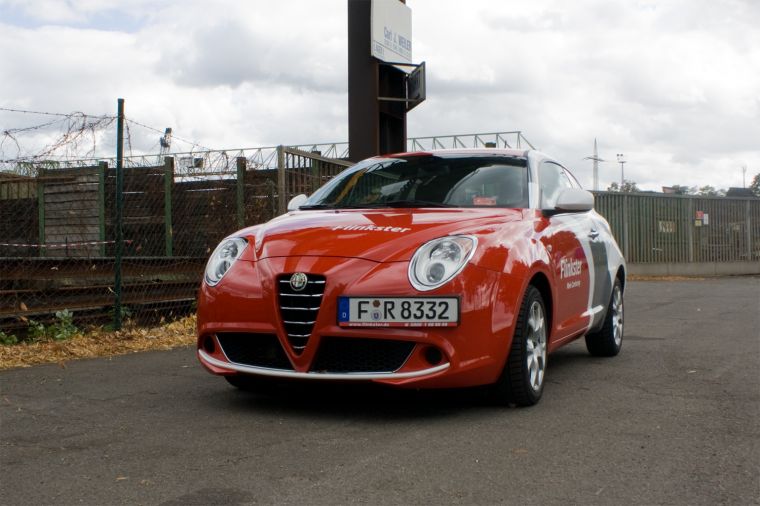 It really was not my plan to post this picture now, but the Audinistas were at it again and I really have to put something up to keep them in check. Did you know that Audi sits in the same town where Frankenstein created his monster (Ingolstadt, Bavaria)? That’s something to keep in mindâ¦ :D

Seriously, though, shenanigan87 and I have had some disagreements about cars. Apart from the fact that he prefers diesels, he also cares about odd stuff like fuel consumption and practicality, while my priorities (also) include good looks, fun to drive, and passion and history. And in my eyes, there is no brand with more passion, history and so on than Alfa Romeo.

So you can probably guess that I was very happy to learn that you can now rent the newest member of the Alfa family, the Mito, all over Cologne âÂ from DB, of all people, with a new service called “Flinkster” in best DB pseudo-english, part of DB’s already large car sharing fleet. Obviously, I had to try that out, and in the process take at least one picture of the car. The color scheme may not be the best ever put on the Mito, but the car is a lot of fun. It uses the 70 kW / 95 HP petrol engine, the second smallest on offer, but when driving around in a city you truly do not need more. The steering is direct and it does accelerate enough on traffic lights. I guess I’d want more power on motorways, though. The trunk isn’t too large, but the interior design, look and feel is awesome and almost on par with the 159 TI (although no leather seats). However, the GPS is worse than usual Alfa standard, and I’d already recommend not to get that either. Anyway, if my car ever needed replacing and I was rich enough to buy a new one, I’d probably take something like this.