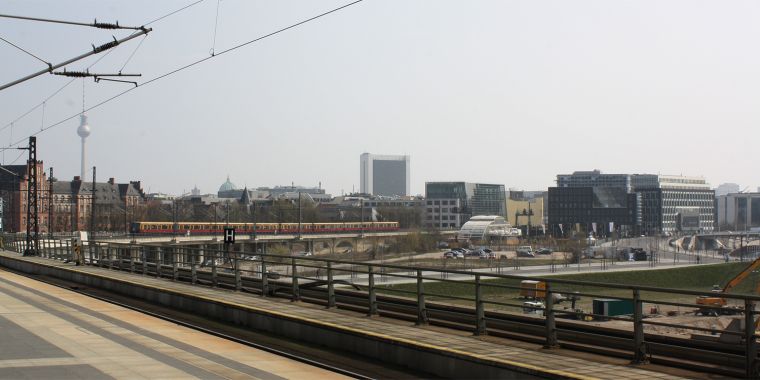 Berlin is, without doubt, the most interesting german city. It’s huge, chaotic and looks different at every corner, and, important for me, it has highly interesting railroad systems. One could easily spend a month, a year or longer seeing and photographing it all. I had two days. Let’s go!

Here, my sister and me have just arrived in Berlin Hauptbahnhof (in Berlin, english announcements also use the german term Hauptbahnhof, even though in other german cities it’s translated as central station), which is at the location of the former Lehrter Bahnhof. It’s not exactly an obvious choice for a central station, seeing as it’s integrated rather badly into Berlin’s commuter rail and subway systems (a subway line connecting it will be opened this august). It does give a nice view of Berlin, though. There’s the Fernsehturm (TV Tower), to the right the new government area (at the far right you can get a glimpse of the Kanzleramt, seat of the head of government), and in the middle of course the Stadtbahn rail line with one of the ubiquitous yellow-red S-Bahn trains.

As my time was heavily limited, I decided to go to the less obvious locations, even less obvious for railroad fans, so this will be the only picture from Hauptbahnhof that I’m going to post.