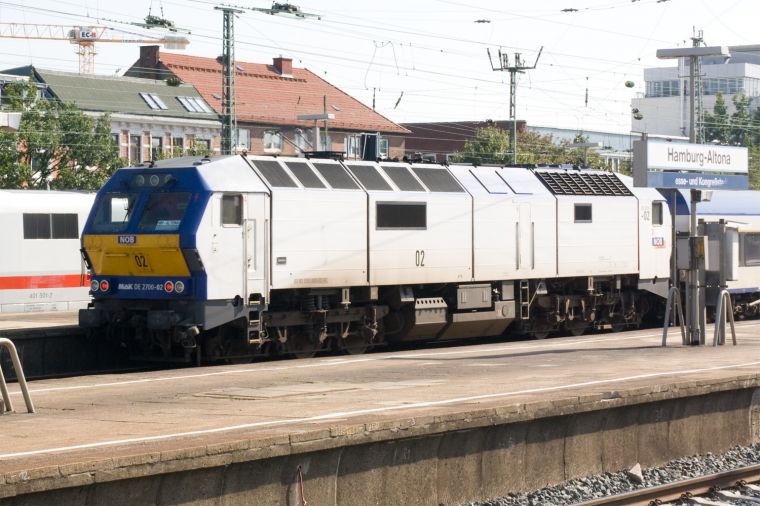 Well, blue ends anyway. Sorry for the crappy picture across Hamburg Altona station. I normally try to avoid this, but by the time I was in a better spot, this train had departed again, and I really wanted to post something because this locomotive is really interesting.

In the early nineties, norwegian state railroad NSB tried out the [MaK DE 1024][de1024] and decided to buy something similar for themselves. The new machines, called Di 6, received a new (presumably moose-impact proof) body shell and new electrics from Siemens, who had bought MaK at that time. They were quite a failure. Lots of break downs came paired with the fact that NSB had changed it’s locomotive strategy and didn’t really want large 2650 kW (3500 HP) units anymore. In the end, they were returned to Siemens. Siemens then converted them for service in Germany and added them to the Dispolok leasing fleet. There, they did just about anything (including being tried out as ICE rescue locomotives). In the end, Vossloh (by then owner of MaK) bought them. Now, some of the machines are rented to Nord-Ostsee-Bahn (North- and Baltic Sea Railway), a regional train operator in Schleswig Holstein belonging to Veolia, such as DE 2700-2 (DE 2700 being the new manufacturer’s name), 92 80 1251 002-2 D-VL, here.

It has just pushed a set of Bombardier “Married-Pair” single-decker cars (more on them later) into the station. One particular point I’d like to draw attention to is the home-made destination sign in the locomotive’s right window, apparently from a license plate shop. All of NOBs locomotives use them.

Oh, and just for extra irony, some of them [are used in Norway again][nbw] (picture by [norwegianblackwolf](http://NorwegianBlackWolf.deviantart.com/))â¦