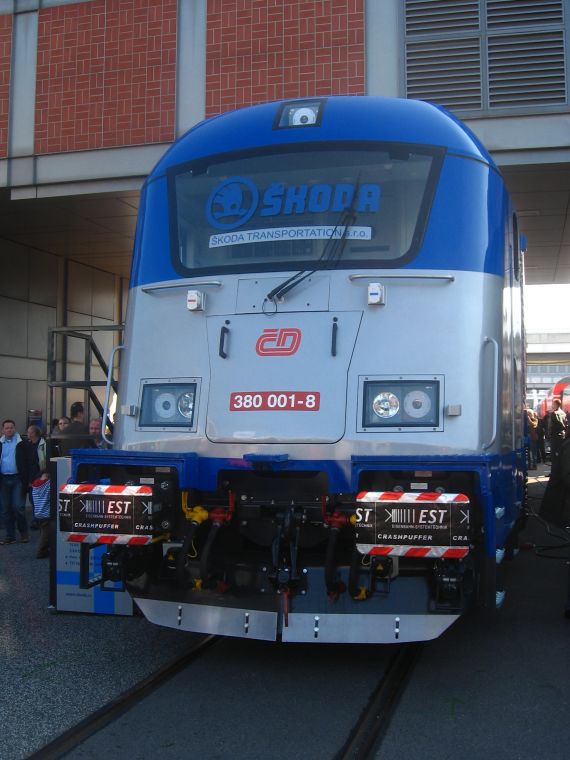 Å koda (nowadays no connection to the cars anymore) showed at Innotrans it’s very newest engine, the 109E which is meant to run for czech CD as class 380. The locomotive does well in comparison, with cabs complying to the latest crash standards, a power output of 6400 kW (8600 HP) and a top speed of 200 kph (125 kph, 56 m/s). It’s equipped for electrification with 3 kV DC, 25 kV 50 Hz AC and 15 kV 16.7 Hz AC (dutch 1.5 kV DC seems to have been left out, which actually makes sense for the Czech Republic). Additionally, it’s optimized for bad tracks, tight curves and generally treating the trackage very softly. The looks were done by Porsche Design,yet another proof that big names don’t have to mean beautiful results, Johnathan Ive excepted.

I didn’t even know what Å koda was producing ever since they built the ones that CooL-Thing made cool digital drawings of, so I was rather surprised when I heard (some time before Innotrans already) that they were building an engine that compares favorably to the latest and greatest from Bombardier, Siemens and Alstom (who don’t seem to want their newest electrics in Germany). More locomotive variety on european rails, and german rails in particular (it is planned to homologate this locomotive for Germany) can only be a good thing.

Å¡kody class 380 yay. Our engines are becoming quite famous... =P

I'm annoyed just by 3 things. First it lasted ages to develop and test it properly. Second the shape totally doesn't fit the classic style of Czech engines. I know the aerodynamics stuff and all but that's really not that necessary since the engine never exceeds 160 km/h on our lines (I'm not sure 'bout the other countries though). The third is that I'VE NEVER SEEN AND HEAR IT PERSONALLY. AND I FREAKIN WANNA!!

LOL! Yes, I'm not too hot on the shape either, I'll admit. But for what it's worth, I didn't hear it either...