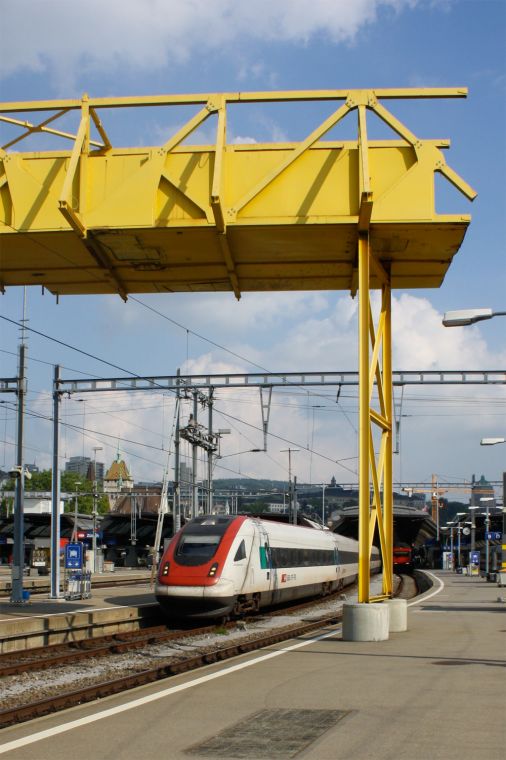 The ICN (Intercity-Neigezug, in english Intercity Tilting Train), class RABDe 500, is more or less the flagship train of Switzerland. Practically, the 200 km/h (125 mph) train is not all that special - the same speed is also reached by conventional and double-decker Intercities, not to forget the german ICEs, french TGVs and swiss-italian Cisalpinos. The ICN differs from all these (except the Cisalpino) by being a tilting train, having higher speeds on older lines, which are the clear majority in Switzerland, but nevertheless, the speed record for trains in Switzerland is actually held by a german (shortened) ICE 1, which reached 281 km/h (175 mph) during ETCS test runs. As usual in Switzerland, it does not have higher ticket prices either.

Still, the ICN is clearly marketed as the domestic premium train. One piece of this is that each train is named after some famous swiss person, in this case after Jean-Jacques Rousseau. Interestingly, this naming is not just some text near the front windows. The interior is also lined with quotes of the name-giver or information about their life, trade or key innovation.

The Pininfarina-designed body with the huge whites and small window bands (the paint scheme has since been copied for all swiss domestic single-decker trains) looks as if the train was very dark inside, and as it turns out, it actually is. A general preference for dark blues and dentist colors on the inside does not help either to make one feel comfortable in the train. It’s certainly not a disappointment (cornering in a tilting train at more than normal track speed is always fun), but it’s not exactly a big revelation either.

Picture taken in ZÃ¼rich central station. No, I don’t know what that yellow semi-bridge does either, but it does make for an interesting frame, I hope.