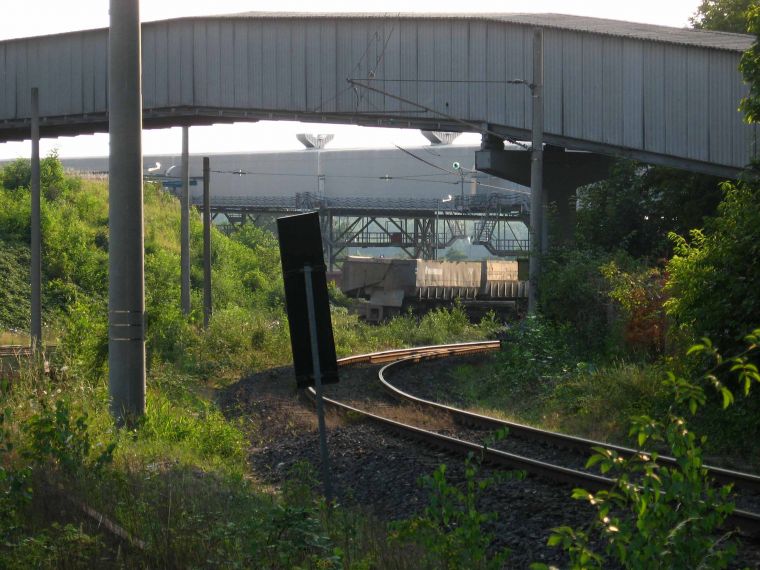 Most of Europe’s lignite comes from the “KÃ¶lner Bucht” area, which is roughly defined as a triangle between DÃ¼sseldorf, Aachen and Bonn (not Cologne/KÃ¶ln, as that happens to be right in the middle). However, the majority of the lignite produced there never leaves the area, instead it gets burned right away in huge lignite power plants in the area. To move the lignite around, there are a number of conveyor belts, but also a rather peculiar railroad system. Sadly, it’s extremely difficult to get access to a good point to see operations, and there are no (public) timetables so it’s not easy to catch something in the wild either.

Here we are in NiederauÃem, a village that would probably describe itself as a town, but we all know better. It’s dominated by a huge lignite power plant, to the degree that I get depressed just seeing it. As expected, the railroad has a track to here, and you can see some cars parked under some conveyor belts.

This railroad is the only one in Germany that has a maximum axle load of thirty instead of twenty-one tons (metric). If you look you’ll see that the ties are spaced more closely than elsewhere in Germany. You might also notice that the insulators on the overhead system are rather tiny. The reason for this is that this line is electrified with 50 Hz/6 kV, a value not used elsewhere as far as I know. Sadly, I didn’t get any of the very odd locomotives used here.

None of this stops normal traffic on the line, though. At least the HGK (Hafen- und GÃ¼terkehre KÃ¶ln, i.e. Harbour- and Goods traffic Cologne) runs trains over it sometimes, although all diesel powered.