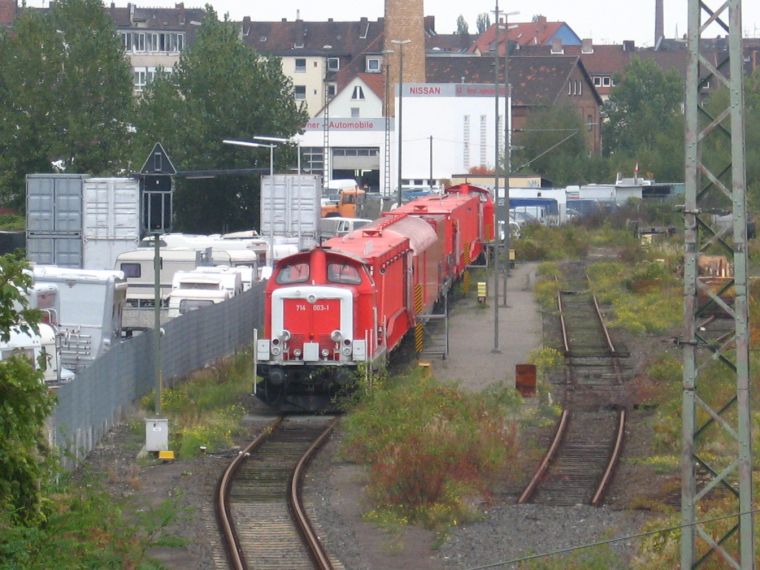 I got some reactions on the swiss firefighting train that were basically like “The swiss sure are an odd people”. Well, we have something like that ourselves here in Germany, for example in Hildesheim central station.

The six Rescue or Tunnel Help Trains belong to DB Netz (the part of DB that owns and operates the railroad network) and exist in uni- and bidirectional versions. Their main job is to fight fires and evacuate people from the long tunnels of the older high-speed lines, however they can in principle be used all over the republic. The train stationed in Hildesheim is an unidirectional one, but has, like all, two locomotives (class 212, here called class 714, some of the last of the Bundesbahn V100s), both as backup and to create a shuttle service to get people out of the tunnel with the rear locomotive and the dedicated transport car, which is the last of the wagons.

Ultimately, the system wasn’t a success. We haven’t had any accidents that would have required the use of these trains (knock on wood), but in exercises it turned out that manning the train with firefighters and getting it to the accident site can take significantly longer than it should. In addition, the trains are very maintenance heavy due to their equipment and the requirement to move them regularly just so that they don’t rust. Newer high-speed lines are instead equipped with access-ways for conventional firefighters and more emergency exists in the tunnels.