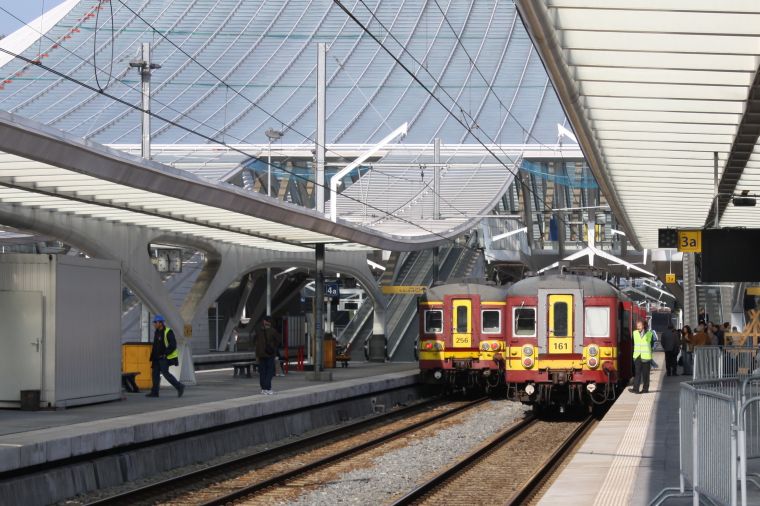 The first part of the journey took me, with the right of the two EMUs, to LiÃ¨ge-Guillemins, LiÃ¨ge’s central station, which will be very beautiful some time in the future and is currently very unfinished.

This type of EMU is known in Belgium, or at least in the french part of Belgium (of which LiÃ¨ge is a part), as Automotrice Classique, in english “classic MU” and can be found everywhere. I found one in the toilets of a McDonalds restaurant once, it was peaking out of the disabled stall1. Unfortunately, I know nearly nothing about them. They come in either brown or white, with the white ones being more comfortable. Normally, the lights assembly is vertical, but the one on the left has horizontal lights. Maybe it’s some sort of award for exemplary service…

All of these vehicles are, in various ways, uncomfortable and dark, and there’s not much place to sit in. Accelerating, they sound like the pre-war types on the Berlin S-Bahn, which shouldn’t be surprising (there aren’t that many ways for a DC EMU to sound like), but the ducht Plan Vs are much quieter there. Finally, at their top speed of 130 kph (80 mph), they sound like a german double-decker train at 250 kph (155 mph)2. I can’t fault their acceleration, though, these ugly things are rockets.