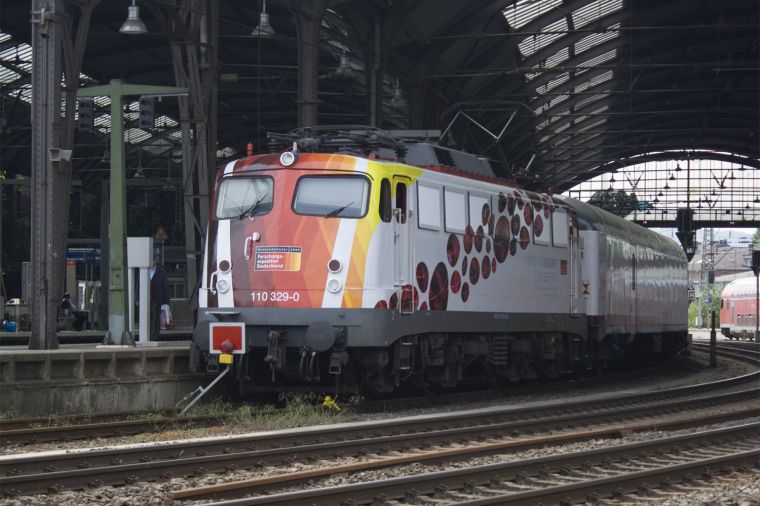 Today for the last time you can see this train standing in Aachen central station, showing an unusual but not unpleasant paint scheme on class 110 locomotives. The red sign, by the way, indicates that this track is closed for all traffic at the moment, making the train something of a permanent fixture.

This is the “Expedition Zukunft” (Expedition Future, it really does not make more sense than that) “Science Express” project, which is a rolling exhibition showcasing current trends in science, new technology and the like to the general masses. It’s a cooperation between the Federal Ministry of Education and Research (Bundesministerium fÃ¼r Bildung und Forschung, BMBF), several research institutions and several private companies, done to celebrate that 2009 is the official year of science in Germany.

Railway-wise, it’s very interesting. The 110s (there are two, although I’ve seen only one of them in Aachen) have received new liveries, even covering up the engine room window. The cars are all former baggage or bicycle cars remodelled, and the remodelling worked very well. Thanks to great use of light, mirrors and colors, one feels as if there is much more space than a normal UIC Type-X carriage should have. By the way, although the train is stationary, the locomotive is quite active and has the pantograph raised to generate electricity for it all.

Content-wise, it’s like the Expo 2000 on wheels - the boring parts in particular. The exhibition (which is bilingual in german and english, by the way) stays vague and refuses to deal with any topic in much depth. It’s nice to get an overview, but if you just follow normal science news regularly, then you won’t find anything shocking. Still, it’s nicely done and if you can spare the hour it takes you to go through it all, it certainly won’t make you more stupid. See where it’ll go next on the official homepage.