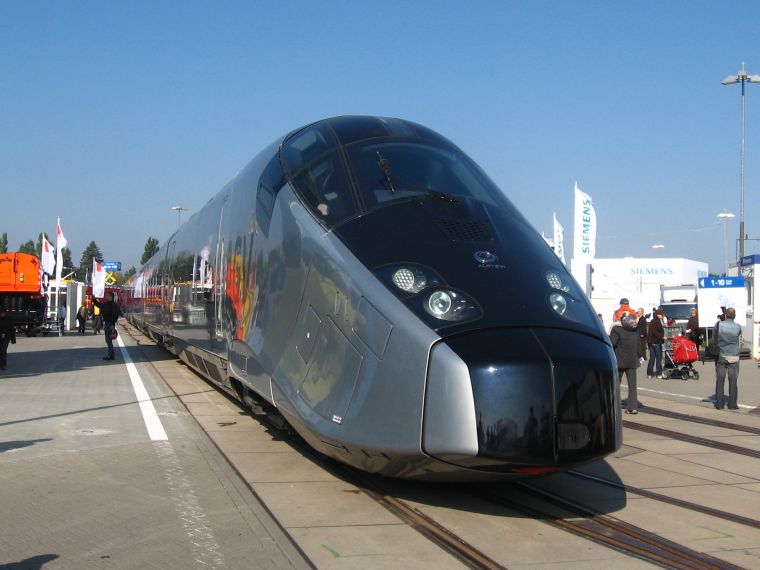 By right, this train should have been the star of Innotrans. Practically, that role fell, for reasons I absolutely can’t understand, to the Voith diesel locomotives, which I actually find to be nicer looking. Yes, it’s true, I don’t like the AGV’s design. The long nose with the plump ending, the dog-like face, the bell-curve-shaped cross section at the beginning, to me it just looks bad.

The Alstom AGV is the successor to the well-known TGV and uses, like, the german ICE3/Velaro a distributed propulsion system instead of two huge power heads at the ends of the train. Alstom seems to have a lot of hope in this system, but actually there are no orders by the french railway SNCF, which also had little influence on development. The actual launch customer is italian NTV, a private railroad that wants to operate high-speed trains over existing lines as competition to Trenitalia. This particular train, however, won’t be going there, it’ll remain as a testing prototype with Alstom.

The company, by the way, does not get tired of pointing out that the train played some part in the new rail vehicle speed record. I think they exaggerate a little. Yes, it’s true that the train had experimental AGV propulsion technology built in, and no, without it it’d have probably never reached the 574 kph (356 mph), but I still think that most credit for this should go to the two large power heads at the end of the train.

By the way, it was still difficult to get pictures of the train, since apparently, nobody considered the five waiting photographers a reason to get out of the way or at least not linger right in the shot. Sometimes it can be amazingly hard to maintain a positive attitude towards humanity.