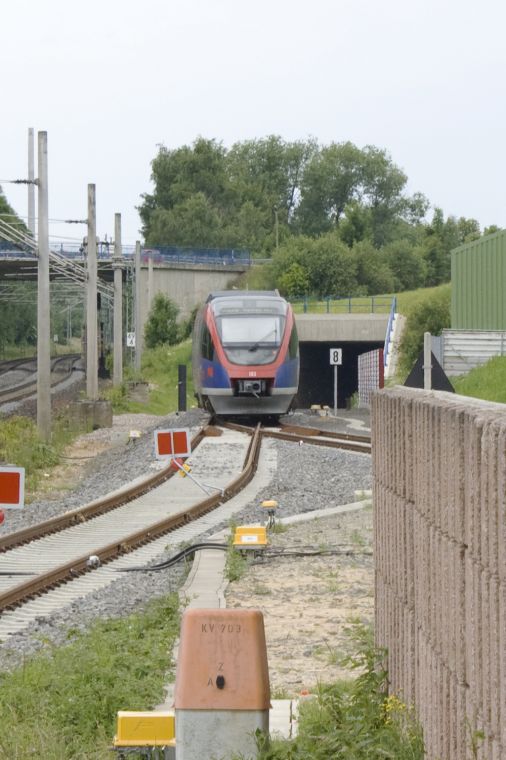 We interrupt the regular delivery of pictures from the Netherlands, becauese today is the second sunday of june, which means since a few years: Europe-wide minor timetable change (the yearly major change is on the second sunday of december). The changes brought by the mid-year timetable are usually limited, but today, two completely new railroad lines, neither the re-opening of a historic connection, were opened in the region of Aachen.

The 2 km line from Eschweiler-Weisweiler to Langerwehe is the first new line for regional traffic built in North-Rhine Westphalia in the past fourty years. It extends the Euregiobahn network further west back to the main line, and come december, will allow connections all the way to DÃ¼ren. For this line, a tunnel and a bridge were built (which was done by first building a tunnel and then putting a mountain on top) and the station of Langerwehe was completely remodelled, including the addition of a new track.

I’ll be honest, I hadn’t thought that they could do it on time. The project had been delayed before as federal funding suddenly became unavailable, and when I first arrived in the region, you didn’t see the slightest trace of theis project. But now it works, and it’s far from the last of its kind. The list of future projects is quite long, with the opening or extension of four additional regional lines and two intercity lines by 2015, as well as two regional lines further in the future and infrastructure upgrades on existing lines, and that’s not yet counting the projects in the city of Aachen itself. Some people say “May you life in interesting times” is a curse. I say screw them.