The Last of Its Kind 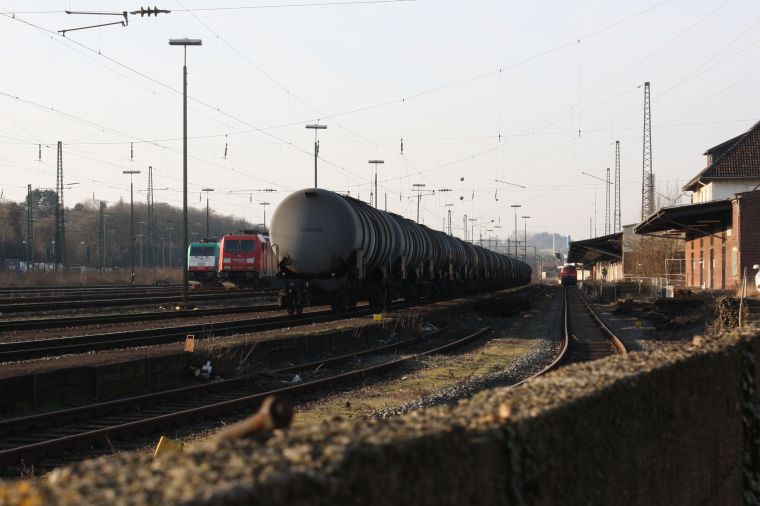 One day, I’m going to write a long blog post or journal or something with a list of things I don’t like in railroad pictures, with all examples provided from my own gallery. Take this one, for instance: I think it’s pretty interesting how the tank car train separates the diesel locomotive under the roof from the two electrics on the left, but it’d have been nicer if both electrics were larger, and in particular if poor old 2823 (that’s the white-and-turquoise one) didn’t look as if it was getting impaled by that lamp post. Sadly, I didn’t have much choice for the right angle.

I’ve talked a lot about the Bombardier TRAXX series, here represented by ATC/SNCB/NMBS/COBRA’s 2823 (a TRAXX 2E MS F140) and DB Schenker or Railion or DB Logistics or whatever 185 240 in red (a TRAXX 2 AC2 F140), and I know nothing of interested about tank cars, so please let me draw your attention to the class 225 diesel locomotive hiding under the roof in the back, more or less the one thing that really makes me want a tele lens.

The class 225 is identical to the class 215, it just has received new numbers when the locomotives were transferred to freight service (sub-class 225.8 is an exception, but that leads to far here. This is a plain 225). The 215 is very similar but not identical to the class 218. In particular it has less power, and was purchased more or less as a stop-gap measure while the 218 production was still ramping up. A number of the units have belgian train control equipment, and a number of these used to be stationed in Aachen West, although they were seen far less frequently than their (stronger) belgian counterparts, the class 55. With the start of fully electric freight service to Belgium in December 2008, they should all have been removed and (according to someone who was also standing there watching trains a while ago) brought to Bavaria. This lone example, however, continues to keep standing here. Whether it’s reserve or just plain broken, I guess we’ll never know, but I’m glad I got a half-way decent shot in it before it gets away.