What it was (maybe) meant for 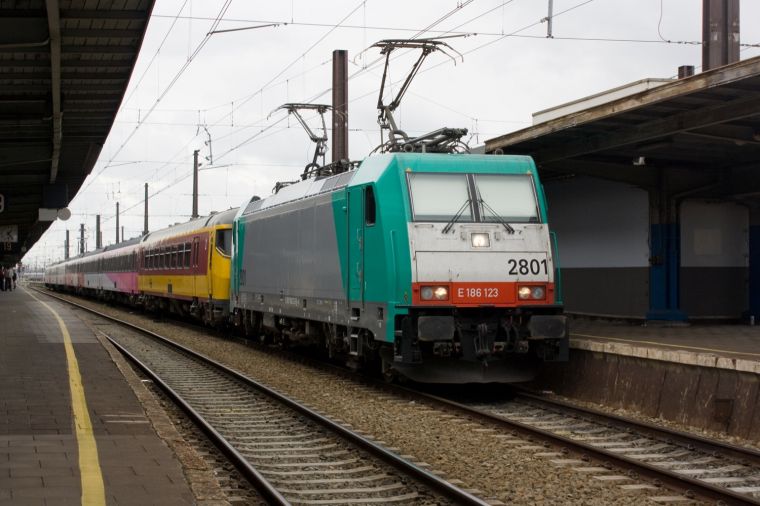 The story of the belgian class 28, that is to say Bombardier TRAXX 2E F140 MS machines leased from Angel Trains Cargo to SNCB/NMBS, is so confusing that Iâm more and more thinking they made it more complicated on purpose.

The original story was that the AnsaldoBreda V250, was not ready in time for, well, anything, most notably the opening of the new high-speed line connecting Belgium and the Netherlands. Hence, both SNCB/NMBS and dutch NS Hispeed leased a couple of 186sâs (as they are known in germany, and the number is also written on each of these machines) and had them homologated for a top speed of 160 kph instead of the normal 140 kph without any mechanical changes, which was a great publicity device. 2801-2803, ATC numbers E 186 123-125, were the belgian part of that order. Later, but not much later, if really later at all, SNCB rented forty 140 kph machines for the new COBRA joint venture with DB, for electric freight service to and at least to some degree within Germany. Those are 2804-2843 (Iâm not quite sure why there seems to be no 2844), ATC numbers E 186 196-235.

However, as far as I can tell, there seems to be no COBRA. Thereâs no homepage, no logo, no markings on the locomotives, nothing at all indicating that itâs anything but plain B-Rail, as SNCB/NMBS also likes to call itself. Meanwhile, Iâve 2801-2803, the “High-Speed” units on belgian-german freight services, with the 160 field reading 140 again (meaning the locomotive has now, like all ATC E 186s by the way, two 140 fields). So I thought the plans for using belgian units for the service to the Netherlands had been abandoned, but then I saw this: 2801 in front of one of the so-called Benelux trains, some carriages of which have been repainted in the V250âs colors by now. There was also another 186/28 from the COBRA number region stationed in Brussels. I am officially completely confused now.