I’d like to write down what the year 2005 meant for my game and what I plan to do in the future.

First of all, merry christmas to all who read this. If you do not celebrate christmas, just have a nice day. That was not my reason to post this, but if I already post something today, I might just as well include it.

Programming not quite done yet

A long time ago I wrote that I was finished with programming, at least for the first version. From then on, I would only create content and then do a release. You didn’t take this seriously, did you?

I have had a display for frames per second, passed checkpoints and so on for quite some time now. It does work as it should, but I’ve got a small performance problem.

Some time ago I wrote about my snow system which gave me falling snow. For some reason, it vanished. I don’t know when or where, but you’ll notice that the snow is gone from quite a lot of my later screenshots. Now it’s back again!

Not for people who think VW makes beautiful cars

I’ve just got a new iMac G5 with 2.1 Ghz, 20” LCD screen and ATI Radeon X600XT - a huge improvement over my old iBook G4 1 GHz with 12” screen and ATI Radeon 9200, which will now only be used for work on the road (Ironic part: I am more of an nVidia fan because of the lots of documentation for developers they provide). This thing is so cool that I won’t even try to describe it here. Besides, you’d be bored.

One thing I’d like to mention first: A lot of people tell me that they read my page. Please, if you do, write something in the comments! I always get the impression that nobody is reading what I write anyway.

You wanna hear news about my game? No? Good, because there aren’t any. I would have posted something, but unfortunately, I was confused and pressed the Reset-Button. What guy ever invented this thing? Who ever said “Good that I can erase all I just typed with just one click!”?

Björn has a new HP!

Björn Gernert, best known for his pictures of houses (more info) and primary reason why I now post in german as well, has put a new design on his homepage. This is quite a big event, because his old site combined lack of ideas with bad design. Of course, he did not manage this as good as some other people I know…

Two languages are better than one

I had a problem for a very long time: Apparently, english speaking people visited this site every now and then. For them, I had to write in englisch. OK with me, but I have some friends who are very bad at english and they always requested that I write in german.

Today we had the first snow around here. Unfortunately, it’s all gone now. However, I believe it’s gonna snow again, and then I’ll have my camera and take some pictures to use as textures in my game.

My current messenger status is EMD SD40-2 in progress, and since I also have this as autoreply, a lot of people have asked me what that might be. I think the best guess so far was that it was some formula developed by Einstein. Sorry, but no.

I believe I’ve written too many posts without screenshots lately, so before anything else, here is one:

Everything is kinda horrible, but not horrible enough to be actually horrible. Except for my english, of course, which is definitily horrible.

A lot of people, I think about five, have asked me to create a Windows port of my game. This is not as easy as it sounds, because I use Cocoa, and people say “Cocoa stands for Can only compile on Apple”, which means that it is hard to port Cocoa code to anywhere else. So for a long time I said “I’ll think about it” while secretly thinking “go to hell”.

Just a short update: I wanted to say that the programming part for the first beta release is nearly done. There are just two more functions I want to make, and maybe I’ll tweak a few other parameters, but that’s it. Then, I’ll start creating a map and once I have that, I will release the game.

I’ve wanted to create a true third person cam, that was attached to my snowcat, for some time. Finally, I’ve done it, so the first beta release of my game can’t be far away anymore :-).

Light at the end of the tunnel

I didn’t work on the oil depot shown earlier, but rather tried something new, tunnels. These were not there yet, as normal heightmaps do not support tunnels at all. There are two different possible ways to build tunnels with heightmaps. The first one is reating a static object that looks like mountain on top and putting it in a valley. This will always work, but it requires you to create practically a new static object for every single tunnel if it should look right.

Just for your information: Here is an image of the static model I’m currently working on.

This is a large update today, and it doesn’t even include all the cool things that I plan to do later today and tomorrow, but I just had to many screenshots sitting on my desktop so I had to post now.

Everything back to normal over here (except for the texture), my strange snow-thingy has now wheels again instead of rotating wings.

So it turns out the problem was that I forgot to supply the file extension, which was legal with my old code (it assumed that it was always .obj), but not with my new code (using URLs to access everything). Then I found out that I used the wrong stride on texture coordinates (I think I’ll switch to 3D textures default just to get rid of this issue) and finally ended up with this:

I’ve did some work again on my snow game project. On the one hand, sorry for the long delay, on the other hand, who is reading this anyway?

If you’re english and don’t understand a word, don’t worry, you won’t miss anything.

Some people know that I’m a fan of Lego. Some people believe that I used to be a fan of Lego, but that’s not true, I still am, I just stopped wearing Lego T-shirts. If you don’t know me and think I’m very strange know, you’re right.

And now for something completely different: A while ago I wrote an article about how you could now find my site with LiveJournal. I still don’t know what the great thing about LiveJournal is, but I would want to have it working. For some reason, however, the feed would not update there. Now I finally realised what the problem was: I was using some special chars which I should have encoded but didn’t in the description of exactly the article about LiveJournal.

I hated the screenshot of the last post and didn’t want to see it whenever I visited my own homepage, so I made a new one. Since my last post, I created a skybox with Terragen. I still don’t understand a lot of aspects about this program, but it was surprisingly easy to create a skybox which has no seams and looks nearly photo-realistic.

It took a lot more work than you might think, but I have a skybox and improved weather now. The skybox textures come from TuxRacer, but I’ll look for others soon. The snow flakes have been shrunk (they used to be between 1 and 2 metres, now they’re between 0.25 and 0.5 metres and look way better) and need a new texture. Distance fog is there, so everything is fine, or would be fine if the damn ground texture for my map wouldn’t suck as much as it does.

There are currently several tasks that I will do as soon as I want to, and most of them are quite difficult, requiring me to change large pieces of my code. I was too lazy to do this, so I decided to do something easier. The tracks of the vehicle now have wheels, as they should have had in the first place.

For Mac, there is no to capture videos from games. The only good app for this task is Snapz Pro X, but it’s expensive and I don’t like the name. So to show some videos of the now working movement code, I had to write my own video capture system for this game.

So now I implemented all features I wanted to have for my particle system, including the randomness, and to celebrate this I made a little snow. The fascinating thing about this is that it worked without any problems. Performance is as nice as ever, so everything is cool.

This post was supposed to be longer, but I accidentally deleted my WIP-screenshots, thinking they were older ones. But who cares, the important thing is that I have a complete, working particle system.

My current goal is to get that snow mobile working. On this way, there are several obstacles and I managed to get around one of them. My plan is to implement the tracks as conveyor belts as illustrated in the Newton Game Dynamics forum - where it didn’t work as expected, but I don’t understand any of the alternatives. To get this working, I needed to get joints working. And I got them working.

German again because noone who talks english read this, apparently. If you did read this in english, please leave a comment!

Yesterday, I got the camera working. That was much more difficult than I ever thought, so first of all the easy stuff. I realised that my code to generate normal vectors was wrong, it produced normal vectors at the wrong locations. The problem was that I accessed the array that contained these vectors to get them in a different fashion than when I made them. Now this is fixed, both versions access the array in the same way. 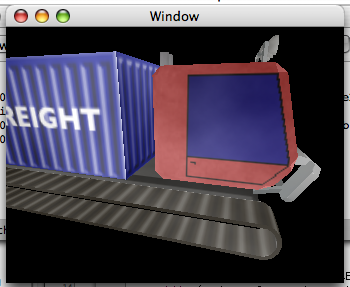